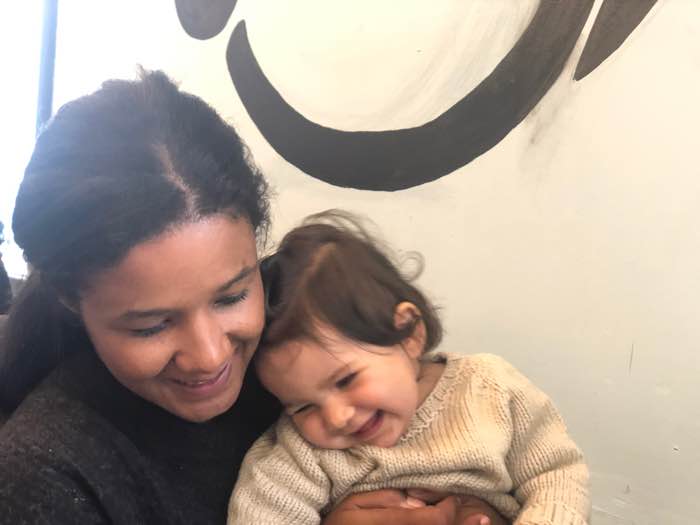 While how it is celebrated has changed in modern times, it’s actually a tradition that in some cultures has celebrated maternal bonds for thousands of years.

As a community founded to gather international families, it felt important to dedicate a post for this day.

In honor of this special day, I sat down with my close friend, mother of two, Mawuena Tendar. Before the munchkins were born, we lived together in two separate flat shares in San Francisco. The city we both moved to in our mid-twenties, looking for a launchpad for our careers.

As roommates, we had a close relationship, and both started dating our close friends around the same time. Once more, we meet at a junction in our lives where we’re now both working on setting up our own businesses. However, with one big difference - motherhood. Mawuena, to our surprise, became pregnant with her son Oscar close to 4 years ago and now also has a 1-year-old daughter, Josephine.

Venturing out on her own

Walk me through your decision to leave Paris and move to San Francisco?

I was living in Paris. I had been working for a few years already, but I still lived in my student apartment. I needed to get out and change things up.

I think it was a mid-20s crisis where I was asking myself questions like “Am I where I want to be in my career?” Am I even in the right city? Paris didn’t feel like it anymore, I needed something more international. I craved to exploring a new country. I also wanted to start being more intentional about my career.

My best friend and now business partner, Lara, was already here and had already been trying to get me to join her out here for a while. And finally, I did.

A 9 hour time difference separates you and your family, did that worry you then?

I was only 25 when I moved out here, and I didn’t think about that. In retrospect, it was a really radical decision that happened really quickly. I gave away all my things and even all my books, that’s the one thing I regret.

Though to be honest, at the time, there was something very liberating about it too. It became an opportunity to redefine myself and what I wanted to stand for.

Did you imagine you’d still be here all these years later?

I really had no expectations when I came out here. And six years later, I definitely did not expect to have found my husband AND have two kids here!

Having kids just sort of happened to us, it wasn’t something we timed. When we had the kids, new questions started coming up. Were we do to it again, we probably would prefer a bit more planning to go into it.

All in all, the move out here has become so much more than I could have imagined. And it continues to be.

Staying connected with your loved ones

Mawuena has a very distributed family and know’s firsthand the difficulty of maintaining the family bond across time zones and continents. With herself living in on the US West Coast and her family living in Germany, Austria, France, and even Toga.

What are some of the things you do to stay connected with your family?

My brother and I are pretty close. He recently also had his second kid, and we’re not finding time to talk as often anymore.

With my mom, we facetime regularly, at least once every two weeks or so. My mom is really busy building her business as well and doesn’t typically call me very often either. We’re very independent.

Then we also have several WhatsApp groups - f.eg. One that the whole family is in, including my aunts, uncles, and grandparents. This is where we share pictures of the kids. My grandparents are really good at participating too. My grandma who’s 75 just recently went to Vienna with my aunt and was sending me pictures of the food they were having!

What do you think would be different if you were closer to your family?

We would definitely see each other more. I’d go visit them more over the weekend if I weren’t so far away. I recently missed my grandma’s 75th birthday, and that really sucked.

One of the hardest things about being so far away is our children not getting to spend as much time with their grandparents and cousins. Instead, we try and leave the kids with family after we’ve been to visit. So that they too get to create bonds with our family back home.

How we define our identity from our culture

One of the things Mawuena and I talked about last time we saw each other was how we felt we were both in a period of our lives where we’ve lived far away from home long enough that we’re slowly losing the connection to our roots. In part maybe because so much time has passed and we just slowly lose the emotional connection to this or perhaps we’re just connecting to a new culture.

As we realise this, we learn that our identity is also something that changes with time, and we just don’t need to hold on to culture as firmly any more.

Of course, all of this varies from person to person, where you are in life and why or when you left home matters a great deal too.

Firstly, how would you define your “cultural identity” as of right now?

Uh la, it’s really mixed - some French and German-Austrian culture. If anything I identify as European. I’m also part African from Toga on my dad’s side. Though that part of me is the least explored. For the first 18 years of my life when he was still alive, I got strong elements of that culture through him.

Cultures have the power to divide us or bind us together. What are your thoughts around this and your relationship to your children growing up in a different culture?

I think they’re still so little that it’s hard to imagine not being closely connected to them. But I see it’s something I need to be more intentional about. My husband and I share the French culture since he’s French and all, so it’s easy to transmit that to them. But the German or Austrian part I have to put a lot more effort into.

Languages is something Oscar, my 3-year-old is becoming more aware of. The other day he said: “I wish auntie were my mom, cause then my dad [his uncle] would know how to speak German!”

I want to share the different parts of my culture with them. But there’s a lot of it, and I think it continues to change over time. We’d like to get an Au Pair from Europe at one point too to help with that.

I definitely am conscious of the fact that they’ll be more American, a culture that I don’t really associate with yet. Though I don’t want to live here as a foreigner, so I guess I’m adding a bit of that to my cultural identity.

Do you think anyone in your family has needs that can’t be met by each other, just from the fact of being separated like you are?

My family’s pretty young still. No one is isolated. If anything we’re the needy ones right now!

We’re in a place right now, where we realise how helpful it is to have family close by. First and foremost, our needs are practical - meaning we could definitely use some help with logistics and child care.

Second, we really worry about the emotional aspect. My husband and I both grew up with grandparents, aunts, uncles, and cousins. And not being able to give that to our kids is something we can’t make up for. My nieces and nephews see their grandmother several times a week. Oscar and Josephine only see them a few times a year.

What are some things you’re doing to address these?

We recently decided to move to New York. We hope that the kids will get to see family more often. We’re hoping that our moms can come over when the children are on school break for example and spend the week with them.

I don’t know if it will solve everything since it’s still pretty far away. Though it makes it a lot easier with both the travel time and the time difference being shorter.

Now you’re setting up your own business and raising two kids, how is your family supporting you?

My husband supports me a lot! My family, as in my parents, there’s not as much that they could do. Though when the kids were born, both our moms came over and spent time to help us settle. And they’re always very supportive when we ask for help.

Finally, what do you think makes your situation unique?

In my family, we’re very independent. They’re also reasonably young, with my mom only being about 50. Having a young family makes everything a lot easier for me in the sense that they don’t really need anything from me. In that sense, my husband and his family are in a very different situation as they also have a lot of shared admin, like property.

Mawuena with Oscar and Josephine in San Francisco.

What makes your familial situation different from Mawuena’s? Share your story in the comments below!